8 spices that fight cancer and improve our health

Home /Health/8 spices that fight cancer and improve our health 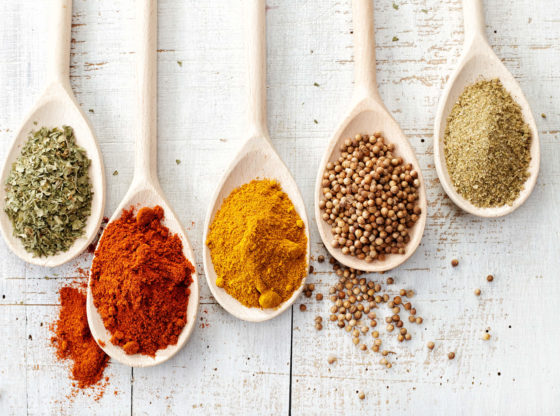 Scientists often make anti cancer tests and health benefits of spices such as cinnamon, turmeric and cumin. We recommend these few spices to be regularly consumed for an extra dose of flavor, but also for health. Here are the spices recommended for our good health.

The spice which has been used for a long time by naturopaths and in the traditional Chinese medicine. It has anti oxidant and anti-inflammatory abilities that are amplified in combination with black pepper according to research and improve the activity of natural killer cells.

Capsaicin, the component which gives the bitter taste of this spice, has analgesic effect by blocking the painful signals that travel to the brain. It also helps to improve circulation, but it also facilitates digestion.

Sweet and intense, but with antibacterial powers. Cinnamon is one of the most used spice in Chinese traditional medicine for its strong anti oxidant powers. Several studies have shown that cinnamon has a regulating and stabilizing effect on blood sugar, and are recommended for people who suffer from diabetes. High doses of cinnamon can be toxic, however, proper usage may help in cancer treatment.

This spice is rich in vitamins A and C. It tastes great and it is a great complement to various sauces, and besides that, it abounds with bioactive components being studied as potential anticancer agents.

The dried seeds and oil of fennel have long been used for medicinal purposes. The active component anethole has an antifungal and antibacterial effect.

Commonly used to treat nausea and stomach upsets, but thanks to its 115 active components it acts as an effective anti-inflammatory agent and cancer fighting spice. Research shows that ginger with its bioactive components helps in the suppression of several different cancers.

It is largely used in Indian cuisine as a spice, but also for re-coloring the dessert. It contains over 150 bioactive components, and it is recently researched its ability to increase chemo-sensitivity of cancer cells.

The powerful anti-inflammatory agent with promising anticancer properties. Studies show that it can slow the metastasis of breast cancer to distant tissues and organs, but it also helps in the effectiveness of chemotherapy.

Try these spices and improve your health.

YOU MAY ALSO LIKE: Breast cancer: How to reduce the risk through the food you eat?